Welwyn Garden City is so well established that with its houses, factories and trees now even Ebenezer Howard would not recognise the fields and farms that were originally here.

So it was that in 1920 all the paraphernalia of construction arrived and proceeded to build what we now know as Welwyn Garden City. As more and more completed houses with their neat gardens became available for the increasing numbers of citizens,the RC Diocese of Westminster realised that there would need to be provision made for the Catholics amongst this growing population. However there was the usual problem of funds or lack of them which needed to be considered.

It became known that a community of nuns in Italy wished to extend their influence to England. They were given permission by the authorities of both Church and Country, and were to set up in Welwyn Garden City. Thus it was that three Canossian Sisters from Milan arrived on 3rd November 1922 and took up residence in a house at No.17 Meadow Green.

Three weeks later on 26th November, the first Mass to be offered in Welwyn Garden City was said by Father Ocajo (a Spanish Vincentian Father) from Potters Bar. It was celebrated in a room of the house which was to continue to be the focal point of Catholic life in the town for the next four years. The first resident Priest of the new parish arrived on 3rd October 1925. He was Canon Arthur Pownall, 68 years of age, from Staines. The size of the congregation numbered five to begin with, growing steadily to fifty by the time the new Church was opened.

Due to the promise from the Cardinal Bourne that a new Church would be built in the district, Miss Francis Clemson offered to pay for the building of a new Church in the diocese and Welwyn Garden City was chosen. Miss Clemson originally wanted to call the Church Saint Francis of Assisi due to her devotion to the Saint. However, the Anglicans had already decided to call their Church by that name so Miss Clemson chose the name of Saint Bonaventure who was the most brilliant disciple of Saint Francis.

Very little is known about Miss Clemson apart from that she died at the end of 1944, and was buried in Hydeway Cemetery, Welwyn Garden City in grave No.B.40 owned according to Council records by Colonel Worrall of Bithan Hall, Avon Dasset, Warwickshire. Miss Clemson's address at the time of her death is given as the Clifton Hotel, Welbeck Street, London W.1. 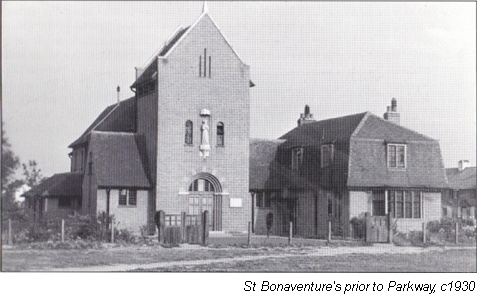 The site for the new Church was chosen by the Cardinal's Treasurer in what was to be called Parkway. The Architect was Mr. T.H.B. Scott who designed a Romanesque style Church. Some say that there is a resemblance to the original basilica of St. Peters in Rome begun in 333 A.D. and destroyed by fire in the 16th century. It was estimated that the construction costs would be £5,000. In the event, it appears that the final cost was about £8,000.

The builders were Ekins & Co. Ltd. of Hertford. Construction started in February 1926 following the laying of the Foundation Stone by Canon Pownall. Construction went at a great pace, and the Church was completed by early September 1926. This was a tremendous achievement considering that 1926 was the year of the General Strike when all work stopped during May throughout the Country. However such was the dedication of the workforce for the Church that during the Strike one worker refused to recognise the Strike and continued to work on the site even though he lived in Ilford and had to walk to Welwyn Garden City and back every day.

Whilst St. Bonaventure's was under construction, the Cardinal created the parish of St. Bonaventure thus making Canon Pownall the Parish Priest who was in his 70th year.

At last all was ready except for the Presbytery which still needed to be finished. Therefore on Tuesday 14 September 1926 (Feast of the Holy Cross) the official opening ceremony took place.

The Cardinal arrived by motor car, and after being robed in the vestry, headed a procession from the vestry door to the front of the Church followed by his Secretary Mgr. Coote, Mgr. Canon Nolan, Mgr. Canon Ring, with priests and acolytes. At the door of the Church, the Cardinal was received by the Rev. Canon Pownall (Priest in Charge) bearing a vessel of Holy Water.

With this His Eminence sprinkled the Portal, and walked with the procession to a special canopy near the Altar where High Mass was to be performed. High Mass was concelebrated at 10.30 a.m. by Fr. Ocajo and the Cardinal Bourne. Bishop Craven and six priests were in attendance. The Mass was sung in Latin with the Gloria and Credo sung by the congregation in the old Gregorian chant.

After the ceremonies, lunch was served to the invited guests in the Presbytery and His Eminence left for York immediately afterwards. 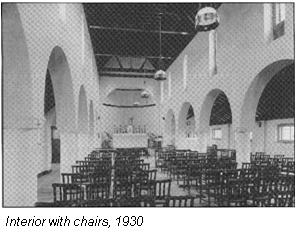 When built, the interior was fitted out with chairs with kneelers. The Altar Rails had gates which were closed whilst Mass was being said. On the Altar itself, the Priest said Mass in Latin facing East with his back to the Congregation. There was no reading desk/lectern. In Winter parishioners needed their coats and scarves, as the heating system of the Church relied on a coke burning stove outside the Sacristy door to warm it. The Church lighting also was poor relying on pendant lights hanging from the roof rafters.

In June 1936, St Bonaventure's Church contributed to a unique bit of Welwyn Garden City's history. The first radio broadcast from the town was made from the Church. It was also the first Church service to be broadcast from this part of the country.

The task of refurbishing the Church began in 1963 under Canon Kelly. The two hundred chairs originally used had to be burned because of woodworm. They were replaced by purpose made pews manufactured by Hitchins Assemblies in their factory in Broadwater Road. The Pews of Beech were designed by Mr Green and Mr D. O'Connor, and installed by Mr O'Connor. At the same time the Parquet flooring of rift sawn Oregan Pine was resanded and sealed with Bourne Seal. A new electric heating system was installed consisting of metal tubes fixed around the walls of the Church, and across the Sanctuary behind the Altar Rails.

The Cross above the new Altar was made by Bert Hammond who also made the pedestal upon which stands the statue of Our Lady and the Ambo. The marble Altar came from Ireland. New consecration fittings and crosses were purchased and installed.

In 1968 new lighting was installed and all the ravages of time were repaired. New stations of the Cross were put into place, and the Church redecorated.

The next major change took place in 1985 with the opening of the Parish Centre by Cardinal Hume on February 3. This provided much needed space for meetings by the various Parish organisations. During this time the old electric heating system in the Church was removed and replaced with gas warm air heaters. This certainly improved the environment of St Bonaventure's during the winter. Again the Church was redecorated. Also more modern lighting was introduced together with a new sound system to assist those of us that are hard of hearing.

When St Bonaventure's celebrated its Diamond Jubilee in September 1986, the Church Bell was rung for the first time since before the last war. There has always been a bit of a mystery as to why the Bell had remained silent for so long. Some said that the reason was that the Bell Tower was a bit weak and could not support the Bell if it was rung. However, the real reason appears to be that some time in the early 1930's, there was strong feeling in Welwyn Garden City against bell-ringing and the Welwyn Parish Council passed a resolution suggesting that the use of 'calling bells' should not be permitted. There then followed prolonged negotiations with the various religious bodies. Finally the Roman Catholic authorities agreed: "Not to ring or allow to be rung any bell or peal of bells on the premises at such times or for such periods or in such a manner as to cause the same to be a nuisance or annoyance to or an interference with, the comfort and amenities of the inhabitants of Welwyn Garden City residing in the neighbourhood". So there you have it!

By 1996, the 70th anniversary of the Church, new front doors were fitted. These were designed to be similar to the originals but fit better and be more secure.

In 2016, in preparation for the celebration of the 90th anniversary of the founding of St Bonaventure's Church, the parquet flooring was sanded and resealed, new carpet was laid in the sanctuary and the main entrance doors were revarnished.  Cardinal Vincent Nichols, Archbishop of Westminster, celebrated Mass in the Church on Sunday 13th March.