The Church is cruciform in plan, with seven arches rising to a height of nearly 40ft. At the rear of the nave is a balcony. Above the entrance is a 9ft. high figure of Our Lady, Queen of Apostles, carved in Portland stone by John A. Green.

Early in 1986, Fr. Eamonn O'Brien invited Carmel Cauchi to have a look at the Church, Our Lady Queen of Apostles. He was asked to come up with some ideas to make the Church a more welcoming place for worship. The challenge was enormous because, apart from the unsuitable colours used in its decoration, the Church had a large window at the back of the sanctuary which dazzled the congregation. The distance from the altar did not allow the people to be closely involved in what was taking place on the altar. The sanctuary was deep. It also protruded into the central part of the transept, taking about three quarters of it's area. There were four steps to the sanctuary and another three steps to the altar. Some months later, Carmel Cauchi presented his ideas to Fr. Eamonn. The rest is history.

The window at the back of the Sanctuary was transferred to the left transept, above the Blessed Sacrament. The floor of the sanctuary was lowered to only two steps throughout its area, finishing with an elliptical shape into the church. Against the bricked window at the back of the sanctuary, Carmel Cauchi created a welcoming figure of the risen Christ, inviting the congregation to Himself, both by gesture and size; thus making the sanctuary appear less deep than it actually is.

Carmel Cauchi designed the new Altar, lectern, Celebrant's Chair and the Baptismal Font, all made of Portland stone. Their elegant shapes relate harmoniously to the arches above them and to each other.

The Processional Cross, in enamel, set in a decorative brass cross is also his work. The wall beneath the balcony was removed, creating an inviting entrance into the church. The entrance from here into the side Aisles was embellished by two arches, repeating similar ones leading into the transept. The floor was carpeted; the whole inside of the church was painted in stone-colour and texture and the ceiling was decorated with a delicate design in wood, echoing the wood of the pews beneath it.

Carmel Cauchi also made the twelve tall windows that illuminate the central nave, sanctuary and transept, in stained glass of strong design and colour, creating a prayerful atmosphere. Fr. Eamonn chose their appropriate themes from the Walsingham litany. In the Church, the artist made three other stained glass windows; one of "Our Lady Queen of Apostles" in the right transept; the "Tree of Life" at the back of the church and a "Pieta" in the room of the Sacrament of Reconciliation.

In 2003, Fr Frank Azzopardi had the Church fully decorated and a new carpet laid.

In 2009, Fr Norbert Fernandes invited local stained glass artist, Matthew Lloyd-Winder, to refurbish the Crucifixion window in the left transept. On completion this had the wonderful effect of bringing wonderful colours into play.

In 2011, Matthew Lloyd-Winder completed three windows for the left side aisle. These depicted Our Lady and the twelve apostles, in celebration of the 50th anniversary of the First Mass being said in 1961.

In November, 2015, Cardinal Vincent requested that Our Lady, Queen of Apostles, be the designated Church for the Stevenage Deanery to have Holy Doors for the Year of Mercy. This Jubilee Year of Mercy was proclaimed by Pope Francis to commence on 8th December 2015. Fr Norbert Fernandes commissioned stained glass artist, Matthew Lloyd-Winder, to produce windows on the right side aisle to celebrate the Mercy of God. They represent the Holy Trinity of Father, Son and Spirit. The windows were in place and blessed on 2nd February, 2016, Feast of the Presentation of the Lord. 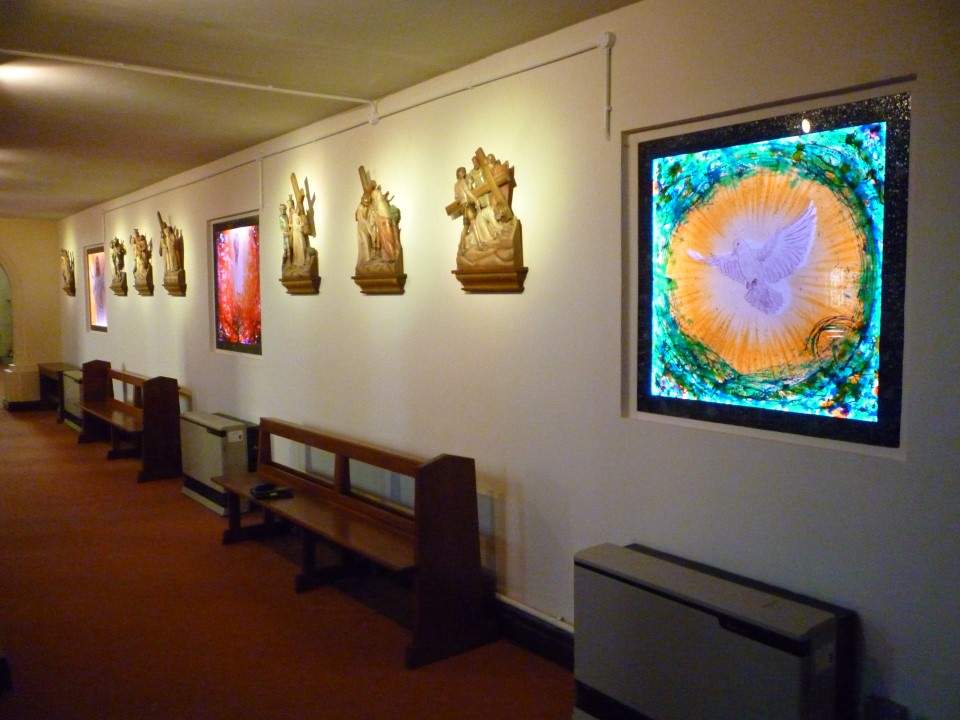